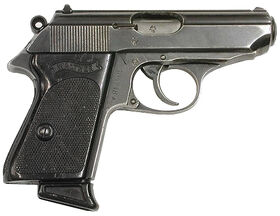 Walther PPK is a firearm that is used by FBI Special Agent Fox Mulder and other characters in The X-Files. This weapon acts as Mulder's secondary weapon for some episodes Mulder either loses his primary firearm or he gets disarmed. Mulder keeps this weapon on an ankle holster and only uses it when necessary. This weapon was occasionally used by Mulder throughout the series.

The Walther PPK is perhaps best known as the weapon of choice by fictional MI6 agent James Bond.

Retrieved from "https://x-files.fandom.com/wiki/Walther_PPK?oldid=115177"
Community content is available under CC-BY-SA unless otherwise noted.