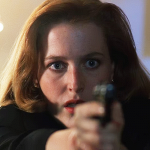 The X-Files IS life.

My fastest time on The X-Files episode quiz: 4 minutes 41 seconds!! 😮

Hi, I'm Dana Scully Fan, I'm a huge fan of the first 5 seasons of The X-Files (I haven't actually finished watching the show, I still need to watch season 7 onwards). I believe that the first 51 episodes of The X-Files (Pilot - Paper Clip) is the greatest piece of television in history.

I enjoyed almost every episode from the first two seasons, all the mythology episodes were CLASSIC. But when I first watched the three-part mythology arc story of "Anasazi-The Blessing Way-Paper Clip" I was completely BLOWN AWAY. I thought the show had reached new heights and would continue to get better and better.

As it turned out, those three episodes would be the absolute peak of The X-Files. The show would not reach those heights again, and the quality of the show (although still extremely good) began to decline. When the mythology arc began moving away from the abduction aspect I felt it had lost some of its meaning, it was what made me fall in love with the show, although I understand and appreciate Chris Carter wanting to expand further than just the aliens and abductions.

So what's my favorite episode? It always used to be the "Pilot", partly because that's where it all began, but mostly because this was when the main theme behind the aliens/UFOs were flying saucers and green extraterrestrials, you know, your very stereotypical pop culture view of aliens.

After a while I realized that "One Breath" was in fact my all time favorite episode of The X-Files, which may seem odd as it is a mythology episode that has very little to do directly with aliens/UFOs. Similar to "Beyond the Sea" in that the episode focuses heavily on emotion and communicating with a loved one on the "other side", David Duchovny delivers one of the greatest performances in the entire show.

MULDER:You gonna smoke that? [Pulls out gun] Or you wanna smoke on this?
CSM: Are you giving me a choice?

SCULLY: The truth is out there, but so are lies

CLYDE BRUCKMAN: There are worse ways to go ... I can't think of a more undignified way than autoerotic asphyxiation.
MULDER: Why are you telling me that?

Retrieved from "https://x-files.fandom.com/wiki/User:Dana_Scully_Fan?oldid=159446"
Community content is available under CC-BY-SA unless otherwise noted.