X-Files Wiki
Register
Don't have an account?
Sign In
Advertisement
in: The X-Files episodes, The X-Files Season 11 episodes, Monster of the Week episodes

"Rm9sbG93ZXJz" is the seventh episode of the eleventh season of The X-Files. It is written by Shannon Hamblin & Kristen Cloke and directed by Glen Morgan.

March 23, 2016: A machine learning chat bot is released to the public via Twitter. It very quickly evolves and is ultimately switched off. The sequence of visual montages ends with a warning to all humans as it turns to the normal intro

Scully and Mulder are in a fully automated sushi restaurant. After they pick their selection on a screen, they both are occupied interacting with their smart devices. While Scully enjoys her sushi, Mulder receives the wrong food: a blobfish. He disturbs the chefs, which also are robots, and leaves the kitchen. He refuses to leave a tip and when trying to get his credit card back, it is stuck in the slot. When trying to use force, an alarm goes off and the restaurant starts shutting down. Scully uses a chopstick to forcefully open the door and they get outside. Mulder now realizes that his card is still in there but gives up on getting it back.

Outside the restaurant, Scully is informed by her smart device, that her "Whipz" (an automated taxicab service) is arriving. Before being able to say goodbye, the vehicle closes the door and she drives away. Mulder enters his own car and drives off. They are both constantly bothered by review requests.

Scully arrives at her home and immediately tries to call Mulder, but their phones refuse a connection. After entering her home, the home alarm system refuses Scully's code and is activated. She has to call in the false alarm and is billed $250 for it. When going to bed, Scully is shocked when a message, suggesting to buy more hair styling cream, arrives seconds after she throws her empty tube in the trash bin. When dismissing the message, she accidentally drops a glass container to the ground, which shatters. The cleanup is disturbed by the doorbell and Scully discovers a floor cleaning robot, which was delivered by a drone, in front of her door. The "ZUEMZ 9000" states, it's "here to help" and Scully, assuming it is a gift from Mulder, puts it on the floor and turns it on. Eventually, Scully gets annoyed with the robot and puts it back in the packaging. Her attempts to reach customer support of the ZUEMZ 9000 in order to return it, fail miserably. All her appliances begin to malfunction and the fireplace goes out, but gas is still flowing out. She tries to light a candle, but the match breaks and falls to the ground unlit.

Meanwhile, Mulder is tricked by his GPS to drive back to the restaurant, which is still upset and has his credit card. He instead grabs a map and navigates by himself. At home, he calls his bank to report the "stolen" credit card. Mulder checks outside the house and sees a mid-sized drone, flying in front of him. At first, he is dismissing it as a child's toy, but after more annoying attempts to spy on him, he grabs a baseball bat and destroys the drone in front of his door. Three bigger drones appear and collect the remains. Still trying to get into contact with his bank (the website refuses his login credentials), he is bothered again by the restaurant, still trying to get a tip out of him. Mulder suddenly discovers that his house has gotten populated by mini-drones and escapes by driving away in his car.

He drives to Scully's home, where Scully just started to smell the gas, leaking from the fireplace. The ZUEMZ 9000 is just about to light the match on the ground by simply rolling over it, when Scully escapes the house by smashing the glass door with a poker. The explosion throws them both in the grass and they run to Mulder's car. Both their phones still refuse cooperation, like calling 911. They try to get to the office, being chased by the drones again. When they can't shake off the drones, they ditch all their traceable electronics and run into a warehouse. Inside the warehouse, the chase is taken over by quadrupedal robots. After being shot at and facing a heavy and agile industrial robot, Mulder eventually tips the restaurant 10%, and the machines retreat and everything goes back to "normal".

In the last sequence of the episode, Mulder and Scully are having lunch together in a humanoid driven diner, paying with paper money and still focusing on their smart devices. Until Scully decides to put her phone aside and gently touches Mulder's hand. To which he reacts by turning his phones screen down. They both sit contemplating and holding hands. 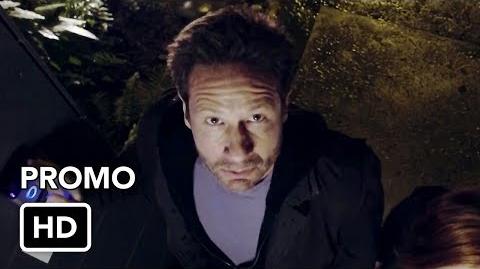 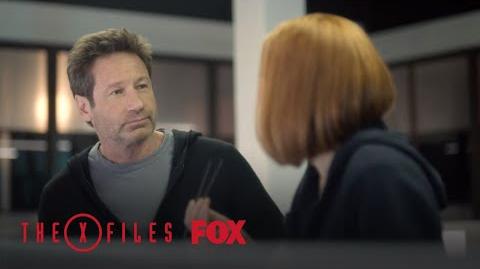 ALERT What Do You Want To Believe? Season 11 THE X-FILES