The mythology, or mytharc, is the overarching story developed in a series of episodes of The X-Files where Mulder and Scully investigate and expose an international conspiracy by an organization known as the Syndicate to develop a human/alien hybrid and suppress knowledge of the existence of extraterrestrials who plan to colonize Earth.

There are 68 episodes in the Mytharc from the original run (including the movie and the feature length finale as one episode). There are 5 episodes in the new mini-series, bring the total to 73. Season premieres and finales always focus on the mythology arc, with the premieres typically continuing on the events of the previous seasons finale.

Even though it is officially regarded a Monster of the Week episode, it is possible to consider Season 1, Episode 4 "Conduit" to be an important mythology episode, because it introduces the mythology surrounding Mulder's sister Samantha. 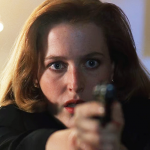