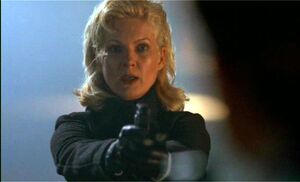 Linda Bowman (played by Diana Scarwid) was the twin sister of Robert Patrick Modell who had the same supernatural persuasion ability. Modell eventually escaped from prison in order to stop Bowman from killing Mulder and Scully in revenge. While on the trail of Modell, Mulder and Scully discovered the corpse of her husband Nathan Bowman. Linda was eventually shot by Scully. (TXF: "Kitsunegari")

Retrieved from "https://x-files.fandom.com/wiki/Linda_Bowman?oldid=60637"
Community content is available under CC-BY-SA unless otherwise noted.