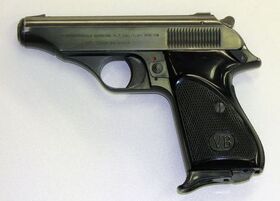 Bernardelli Model 60 is a firearm chambered in .380 ACP that is used by FBI Special Agent Dana Scully and other characters in The X-Files. It is unknown if this weapon is the issued firearm for FBI Special Agents as Dana Scully changes her primary firearm many times throughout the series. This weapon was only used early during (Season 1) by Scully. Scully used this handgun from 1X79 "The X-Files" (Pilot) until 1X06 "Ghost in the Machine".

Retrieved from "https://x-files.fandom.com/wiki/Bernardelli_Model_60?oldid=115159"
Community content is available under CC-BY-SA unless otherwise noted.