The Bermuda Triangle, also known as the Devil's Triangle, is part of the Atlantic Ocean where navigation and establishing accurate compass readings can become difficult. As its name suggests, the region is approximately triangular in shape, with three corners roughly defined by Bermuda, Puerto Rico and Florida. At least part of the Sargasso Sea is located within the eastern edge of the region. (TXF: "Triangle") Numerous planes and ships are believed to have mysteriously disappeared in the Bermuda Triangle. (TXF: "Jump the Shark") Sharks are also common to the area. (TXF: "Triangle", "Jump the Shark")

In 1939, a British luxury liner, the SS Queen Anne, was in the Bermuda Triangle when it suddenly disappeared without a trace. Though the boat was never located, stories began to circulate that provided possible explanations for the vessel's disappearance, including one story that the ship had been torpedoed by a German submarine. (TXF: "Triangle")

In 1995, FBI Special Agent Fox Mulder showed his partner, Special Agent Dana Scully, a map of the 65th parallel, an area where the USS Ardent and nine other sea vessels had gone missing. In an effort to understand the nature of the 65th parallel, Scully asked whether the region was like another Bermuda Triangle but Mulder stated that the area was more like a wrinkle in time. (TXF: "Død Kalm")

By 1998, the national reconnaissance office's lacrosse mid-latitude imaging radar satellite tracked ships and boats that entered the Bermuda Triangle. On November 16 of that year, Mulder learned that the SS Queen Anne had inexplicably appeared in the Atlantic Ocean. He went looking for the ship but became lost in the Saragasso Sea during a storm that destroyed his boat, the Lady Garland. Agent Scully journeyed to the Bermuda Triangle with The Lone Gunmen and located the Queen Anne, but no-one was aboard the ship. After Scully eventually recovered Mulder, he believed he had traveled back to 1939 and had been forced to evade Nazis aboard the historic Queen Anne, the British crew of which had been similarly lost. According to Mulder, he had heard a news broadcast aboard the ship which had confirmed the date of September 3, 1939, even though his own watch had given a date of November 16, 1998. Mulder also claimed that Scully and their superior in the FBI, Assistant Director Walter Skinner, had been aboard the Queen Anne and that, although the ship had been heading away from the Bermuda Triangle, Mulder had convinced Scully to turn the ship around so that history would resume as normal. Mulder suspected that the Bermuda Triangle was some kind of time warp in which the Queen Anne had become caught. (TXF: "Triangle")

In 2001, while searching a smuggler's boat that was docked in Miami, Lone Gunman Richard Langly opened a can of German beer but was thrown back by the ensuing spray, accidentally activating the boat's motor before landing in the water. Although the Lone Gunmen were unsure of what had been on the boat, Melvin Frohike - another of the group's members - later frustratedly exclaimed that, "Whatever we were onto was last seen headed toward the Bermuda Triangle at full throttle!" (TLG: "Tango de los Pistoleros")

In 2002, Morris Fletcher and a female companion named Brittany visited an area of the Bermuda Triangle west of Harbor Island. Their boat was equipped with a sonar that continually scanned the area. While there, Fletcher claimed to have originally named the region the "Bermuda Triangle". He also told Brittany that there were powerful, primal, other-worldly forces in the Bermuda Triangle, hidden beneath the waves waiting to be plucked by man. Three men soon approached in another boat, kidnapped Brittany and caused Fletcher's boat to explode before they left. A drawing of the Jupiter II spaceship from the television series Lost in Space and Fletcher himself both survived the explosion, but the drawing became soaked when it fell into the water. When Fletcher later recounted the incident to FBI Special Agents John Doggett and Monica Reyes, he claimed he had been permitted to cruise the Bahamas after he had lied, to a foreign billionaire who he had been freelancing for, that the air force had lost a UFO in the Bermuda Triangle. (TXF: "Jump the Shark")

Corners of the Bermuda Triangle

Bermuda, the northern corner of the Bermuda Triangle 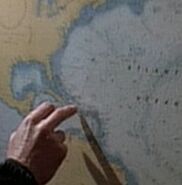 Puerto Rico, the eastern corner of the Bermuda Triangle 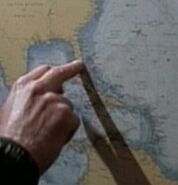 Florida, the western corner of the Bermuda Triangle
Add a photo to this gallery

Retrieved from "https://x-files.fandom.com/wiki/Bermuda_Triangle?oldid=109217"
Community content is available under CC-BY-SA unless otherwise noted.